I have to admit, I really enjoyed the Varsity in Alpharetta. For under $5, I could get two awesome naked dogs, the greasiest fries in the south, and a cold Coke. I didn’t go very often, but it always was there to fill in that all too frequent craving I’d have for junk-food. As the years went on, it was clear to see the Varsity was hardly getting a fraction of customers it used to and it’s eventual demise came as many expected. I do miss them, but I’ve hoped the torn down site would be replaced with something even better.

Speaking of tearing down, was it just me or was the Varsity torn down really fast? It’s not unusual for failed restaurants to sit empty for a long time so this was a special surprise. Turns out this was because the site already has plans for a new development.

Read more for the details on what is coming soon to Alpharetta!

END_OF_DOCUMENT_TOKEN_TO_BE_REPLACED

It’s been about two months since our last post (sorry about that, life was busy), and already so much has changed in Alpharetta! A good place to start is to take a look at what’s happening at Avalon, which has seen some openings, closures, and seasonal fun start up!

END_OF_DOCUMENT_TOKEN_TO_BE_REPLACED

Windward Parkway has a lot of strip centers along it, so I’ll forgive anyone who doesn’t immediately recall which one is “Windward Village Plaza.” For those without photographic memories, it’s the little center on the south side of Windward that used to house zpizza and the recently closed Starbucks which moved next door to get a drive thru and bigger patio.

So what’s new to Windward Village Plaza? We don’t know much yet, but a building permit was recently issued and a sign went up for the LOCAL wood fired grill (not sure if capitalization is right…. just matching the sign.) They are renovating the old zpizza and all we know right now is that the new restaurant will definitely include a bar and this doesn’t appear to be a part of a chain. (Plenty of that already on Windward.)

Stay tuned and we’ll get you more info and a review once the LOCAL is open! We’re predicting a rather quick opening given hey have patio furniture already.

Sippin’ on Tea at Urban Tea 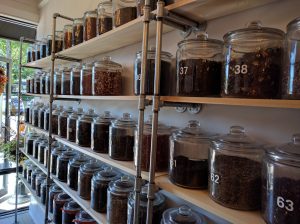 Last weekend, Daniel and I came across this tiny little place right next to Which-Wich on Windward Parkway called Urban Tea. Both Daniel and I are fans of flavored tea so we decided to check it out. The place is very small, but absolutely adorable. There is a front area with about 113 loose leaf teas and a back room where they hold tea parties and events on weekends. The teas are sold either hot or cold as per your liking and they also have scones to enjoy with the teas.

END_OF_DOCUMENT_TOKEN_TO_BE_REPLACED

A Different Kind of Review: The Velvet Note 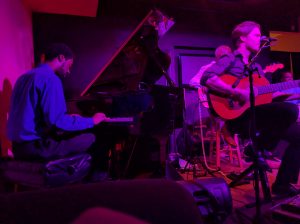 time and time again as one of Atlanta’s best Jazz Venues. We went to the Velvet Note last week to see Roman Street perform (our 5th time here, and 5th time seeing them at the Velvet Note) and as

usual the experience was excellent.

END_OF_DOCUMENT_TOKEN_TO_BE_REPLACED

With all sincerity, I really like Outback Steakhouse. Yes, I know, it’s a chain and it’s Australian theme is maybe a bit overdone, but it’s a place where I can get a good tasting steak at a a pretty fair price. Oh, and I also don’t have to act fancy or like I know what the 3 forks in my silverware set are at the fancy steakhouses.

That all being said, I don’t go there enough because the closest ones are in Roswell and Johns Creek, with a huge Outback gap in between. A gap that is about to be filled.

END_OF_DOCUMENT_TOKEN_TO_BE_REPLACED

Butcher and Brew (That Rhymes!)

For a restaurant that’s called Butcher and Brew, this place sure had some very good vegetarian options in addition to the

meat and the beers! We’ve been to Butcher and Brew twice now; the first time with a group of 7 and the second time with a group of 4. The restaurant does not do reservations, but since we went there on weekdays (Tuesday and Thursday), we did not have much trouble getting seated.

The atmosphere in the restaurant is very casual and sort of hipster-y. Since it is right off Highway 9, it can get noisy if you are sitting close to the door, but not so bad that you can’t hear the people next to you. The first time we went there, it was to celebrate a friend’s birthday and the second time was just a casual dinner with family. The service was top-notch both times!

END_OF_DOCUMENT_TOKEN_TO_BE_REPLACED

As our usual Wednesday tradition came around this week (Wine Wednesdays), we made our way to Village Tavern for some half-priced wine and half-priced apps before 5:00 PM. Once their food Happy Hour ended, we started thinking about any and all places that we could go to that may have a Happy Hour past 5:00 PM. I had heard a while ago from an old boss that Sage Woodfire Tavern had Ladies’ Night on Thursdays and turned into “Cougartown” late Thursdays (not my words!). I also recalled her telling me that they had some sort of deal that sounded like a Happy Hour so we decided to check it out.

Sage is owned by the same people who own Spice at the corner of North Point Parkway and Haynes Bridge Road. It all makes sense now because they have many of the same menu items and the outside sign looks pretty similar…I’m not very observant.

Anyway! We walked in and saw their specials – menu pictured below – for Monday-Friday. I have to say, I was pretty impressed by the variety of drinks and food on their menu immediately. So let’s get to the important stuff:

END_OF_DOCUMENT_TOKEN_TO_BE_REPLACED

Alpharetta Restaurant Week is an annual event where dozens of local restaurants offer special deals, meals, and discounts. This year’s line up looks as 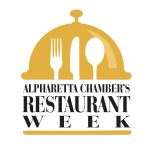 good as ever and includes several new restaurants that opened this year as well as some delivery deals as well!

Read more for a link to this year’s participants and a link to the coupons to use all week long.

END_OF_DOCUMENT_TOKEN_TO_BE_REPLACED

Well this is weird. It’s 90 degrees today and downtown Alpharetta’s best ice cream shop (and only) has closed for 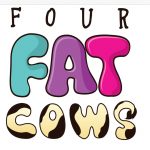 “Winter”. Doesn’t make sense. We have a review coming in a few weeks by a guest blogger on Four Fat Cows, but we’ll have to wait until next year to try it out ourselves. Read on for more details on the closing.